To embrace God given opportunities to invest in the lives around me, to motivate & prepare, disciple & educate, emerging leaders to expose potential into reality.

Integrity. What does it mean to you? 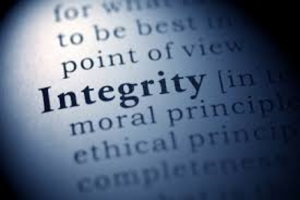 Integrity. I have heard people define integrity as “what you do when no one is watching.”

Dictionary.com, defines integrity as “1. adherence to moral and ethical principles; soundness of moral character; honesty, 2. the state of being hold, entire, or undiminished, 3. A sound, unimpaired, or perfect condition. (https://www.dictionary.com/browse/integrity?s=t)

What about you? Do you believe you are a man or a woman of integrity?

Integrity is often a miss used term, as is character… then there is the concept of ethical. All act as if they are ethical – they are their own judge. No one will act unethical, only others will state as such. Humans do not act unethically on their own – they do what others expect – but what do you expect of yourself and where did that expectation come from.?

I would venture to say that many people hold their pets to a higher level than they do themselves. They expect the dog to act/react a certain way upon command yet are completely inconsistent to themselves and the other humans they encounter. The military creates expectation of responding to a command – as for the better good of the group… but what about the individual. What about you? Who do you allow to command you? To whom are you accountable? Does that since of accountability change or shift with your environment? For example: do you speed when you know you won’t get caught? Back to integrity – how do you define integrity? How do you handle yourself across environments? With or without other humans present?

Life is meant to be lived. Every day we pass judgement on others because we don’t understand ourselves and believe we need to hold others accountable for what we ourselves do not do or do not understand. Morality is not about opinion… it is not about what has happened before in your life. (Hence the discussion of experience of perception, and philosophy we bring to experience in previous posts.) One’s idea of what is right and wrong is wrong – as humans we do not know – we cannot know, we must be influenced. This influence is obvious as cultures, religions, nations all tend to assimilate and or rebel. What do you know to be true and why? Do you think that you came to that conclusion on your own… if so, you are mistaken. You have been influenced from something or someone. My influence is from my Lord Jesus Christ. I believe Him to be the alpha and the omega, all all the time, Absolute Truth. I follow my heart in this choice and decision. I believe that it is only through relationship with Him that life can be lived fully in eternity. As humans we are all destine for eternity either with Christ in Heaven, or without Him in Hell, and the choices I make on this side are reflective of this perspective of what happens when I no longer am on this earth – which tends to set my ethics, morality, integrity. With that said, I also believe that Life in Christ is living life to its fullest; but it does not mean that life is always joyful, and freedom is felt, and good times are the norm. Yet, there is a certain aspect of joy and freedom that comes with this belief that can come from no where else!!  There are many who will disagree with me, and that is fine… they have had different influences and I will agree that there is some aspect of truth in most things… but my prayer for all is that they too will come to the understanding of influence that Jesus Christ is the Absolute Truth. There is nothing I can say or do – the influence alone is Jesus Christ Himself; He is available to you!!